The Great Praise of Shambhala

This is a seven limbed prayer offered to the sublime realm of Shambhala. It can be used to familiarise yourself with the features of the realm and the lineage of Dharma Kings.

This document is ready for translation. If you would like to translate this text into your native language, please contact us at contact@khentrulrinpoche.com.

I prostrate to the masters whose deeds are wonderful, and who, seeing the quintessence of all the glorious great tantras, teach it to others, and I prostrate at the feet of the Primordial Buddha.

I prostrate to those who, with special love for living beings, do not stray from the basic space of phenomena, but constantly work to benefit others by means of numerous emanations pervading the entire world.

In particular, I prostrate to the Kalki Dharma kings born in glorious Kalapa, who, in the form of great universal emperors, illuminate Kalacakra on earth. Shambhala, which they rule, was emanated by an ocean of prayers as numerous as atoms.

The Land of Shambhala

To create it from the basic space of pristine primordial awareness, the gods carefully placed a most sublime, stainless, pure land 12,000 leagues in circumference in the northern half of lesser Jambudvipa in this land of karma, totally surrounded by a rosary of brilliant white glacial mountains.

Inside that is a beautiful lotus with eight petals, the central third of which is the heart of its pericarp, famous as Mt. Kailasha, with all sublime, wondrous aspects totally complete, many fragrant flowers and fruits, finely adorned with lattices of numerous trees, filled with the tastes of precious sublime herbs, and with many rivers of eight qualities.

Upon its beautiful, round, and lofty peak, the sublime sage’s residence known as Shambhala contains more than ten million towns, the chief of which is glorious Kalapa, with a vast breadth of twelve leagues, decorated with gold and various precious substances, and possessing the joy and happiness of the Dharma of the sublime vehicle.

I prostrate to that sublime palace of the noble ones.

To its south, and equal to it, is the grove of Malaya, in the center of which is the creator of conquerors, the complete Kalacakra maṇḍala of five precious substances, six hundred feet in all directions, with the width of the outer circle of vajras being two thousand feet, and radiating stainless light. To that I prostrate.

To its east is the lake of Manasa, and to the west the lake of white lotuses, filled with such stainless pure water, and densely covered with many types of fragrant flowers.

I prostrate to Mt. Kailasha, possessing more wealth than the gods, with flocks of beautiful birds making sweet calls, and with incense, flowers, fruit trees, and so forth.

Equally situated on each of the outer petals of the lotus are 120,000,000 villages. Thus, for ninety-six districts of ten million there are ninety-six rulers of men, wearing turbans of precious substances. The masses of light rays from their crown jewels touch the feet of the past Dharma king Suryaprapha, who was Vighnashatru, to whom I prostrate.

The Thirty-Five Kings of Shambhala

I prostrate at the feet of his son, glorious Sucandra, who was Vajrapani, keeper of the secret treasury of all the conquerors, who offered supplications for the great root tantra.

The rosary of emanated beings in his lineage, from the monarch Sureshvara, who was Ksitigarbha, and Taji, who was Yamantaka, the lord of men Somadatta, who was Sarvanivaranaviskambhi, and Sureshvara, who was Prajñantaka, Vishvamurti, who was Padmantaka, down to Sureshana, who was Khagarbha, all equally taught the great, glorious root tantra from the lion throne of great jewels at eight years of age.

I prostrate to those lords of the tenth spiritual level, endowed with an infinite treasury of most sublime good qualities. From their lineage, Manjuvajra made all castes into the vajra caste. Thus I prostrate to glorious Yashas, the Kalki who abridged the king of tantras. His son, the compassion of all the conquerors, Pundarika, was Lokeshvara. I prostrate at the immaculate lotus beneath the feet of that sublime protector, who composed the vast commentary.

From the lineage of Kalkis appear teachers of the king of tantras, Kalkis who are the ten wrathful kings such as Yamantaka, and between them, the thirteen calm sons of the conqueror such as Ksitigarbha.

I prostrate to those excellent beings, peaceful in nature, finely adorned with the good marks and signs, completely possessing all the qualities of an excellent lord, such as the five eyes and paranormal abilities, great spiritual heroes who illuminate the world with a hundred lights of Dharma.

The Three Kings of the Golden Age

I prostrate to the inconceivable emanations of Raudra’s sons, Brahma and Suresh[vara], who will be glorious Manjushri and Lokanatha, and will teach the Dharma in the sections behind and in front. Then the eight such as Kashyapa will be the common lords of men, teaching the path of Dharma to living beings. I prostrate and take refuge in them all.

In that way, may the lords of men, who bear the cakra, half the cakra, or a section of the cakra, protect us from this terrifying samsara, where we have entered the darkness of ignorance! Mindful of the unbearable sufferings of samsara, I, who have fallen under the power of the mara of total affliction and am bound by the noose of karma, especially take refuge in you!

I prostrate to the learned and realized masters of India and Tibet, whose activities were similar to all of theirs, such as Kalacakrapada, [Nalendrapa], and Shavaripa, who clarified the essence of the meaning of the tantra in all directions.

Moreover, wherever they dwell in the ten directions, I prostrate to the conquerors, their spiritual children, and their disciples, to practitioners of yoga diligent in their vows, and to all who are worthy of homage and worthy of offerings.

With threefold purity I constantly present whatever available and attractive types of offerings exist in infinite realms, as well as devotedly arranged clouds of offerings.

Through beginningless time until now, whatever sins I have committed under the influence of sinful companions, the afflictions, and karma, I confess each of them, regretting how I have harmed myself.

Rejoicing in all virtue, urging you to turn the Dharma wheel, and praying that you remain without passing into nirvāṇa, I am your servant from today.

If you fully accept me, I too will carefully uphold the precious thought of enlightenment in order to remove the sufferings of living beings, and follow in your footsteps.

Whatever virtue may thus arise from faithfully making offerings, praises, and taking refuge in excellent beings, I dedicate for the benefit of others, that the three assemblies may not decline, but increase!

When my body and mind separate, may I be free from regret, harmful distraction, and confusion, and, without straying from mahamudra, definitely go to glorious Kalapa with firm faith, joy, and delight, be blessed by the Kalki emperor in the palace of the sandalwood grove, and be liberated that very instant!

By the kindness of Kalacakra, I will thus realize immutable mahamudra, and, with numerous instantaneous emanations in the ten directions, be solely energetic for the sake of others.

Furthermore, from today, and in all lifetimes, may I be endowed all the qualities, such as being faithful, energetic, wise, and compassionate, having pristine, altruistic motivation, and being extremely honest, possessing sublime courage and pure livelihood, dwelling in moral discipline that delights noble beings, being graced by excellent spiritual friends, possessing great immaculate learning, achieving sublime meditative concentration, gaining control of my mind, having recollection, bravery, and the five paranormal abilities, and, by means of the three pure trainings, may I absolutely always practice the ten perfections and the Vajrayoga in order to fully complete all the aspects of taintless, self-arisen omniscience. By the great truth of the Three Jewels, may these prayers will be fulfilled as intended.

The precise situation of Shambhala and glorious Kailasha, previously undiscovered by the experts of India and Tibet, I have fortunately discovered, my mind was long filled with joy, and I gained faith in the place, teacher, retinue, and Dharma. The words of my wish escaped: “When this body is discarded, may I become a son of the Kalki in that pure land!” and, at the urging of an excellent being, I composed this for the benefit of myself and others. If this is not agreeable to the minds of some people, because it has not been thus understood before, please totally cast aside your previous evil propensities, and look at the great commentary to the tantra with an impartial attitude. In reliance on the meaning itself, the beggar Dolpopa composed this to be easily understood. Mangalam bhavatu! Translated by Cyrus Stearns. © 2008 Cyrus Stearns. All Rights Reserved. 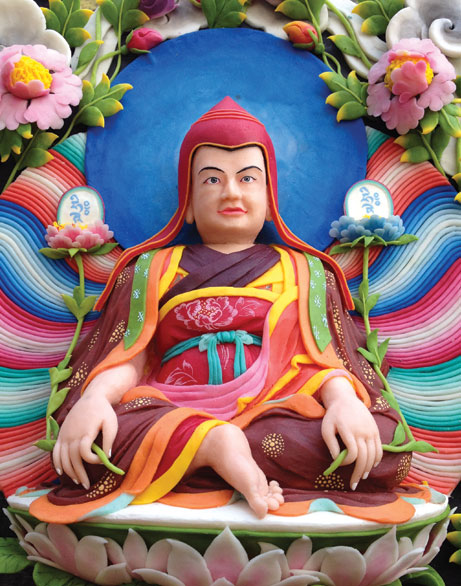